The original Dodge Canter from 1971.

Fuso is celebrating 50 years of the Fuso Canter in Australia.

The Canter has become a household name and more than 72,700 have been sold in Australia since the first trucks rolled into showrooms in 1971.

The Canter has come a long way and is much more advanced truck than its 1971 relative, with features such as the radar-based Advanced Emergency Braking System, a lightweight common rail turbo diesel engine and a dual-clutch automated transmission.

The first Canter to be sold in Australia was rated at 3.5 tonnes, produced 95hp and was priced at $3287. Advertisements at the time boasted of 'extra' features such as "flow-through ventilation" and "safety glass all-round." 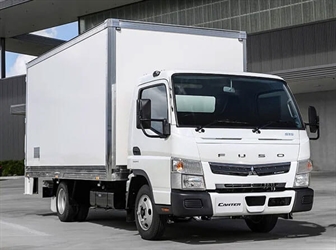 The current Fuso Canter available in 2021.

Canter soon established a reputation as a durable and willing worker and it wasn’t long before it became a common sight on roads and industrial facilities across Australia.

The Canter has continued to evolve over the years, with constant improvements that have meant each new model is more efficient, safer and easier to drive.

Canter is now available in a range of configurations from a 3.5 tonne car licence model to an 8.5 tonne version, along with City Cabs, Wide Cabs, Crew Cabs, Built Ready tippers, tray trucks and pantechs as well as a rugged 4x4 unit and the new all-electric eCanter.

Fuso Truck and Bus Australia Director, Alex Müller, says: "The Canter has achieved a lot of firsts throughout the years and the current model is the best Canter ever, being first with active safety and first with an OEM electric option in the form of eCanter."

"If you also consider Canter’s low tare weight and its five year/200,000km warranty, it becomes clear why Canter has such a good reputation in Australia," he says.