Trophy-winning livestock Fuso Heavy stands out from the herd

Victorian-based livestock hauler is moving sheep and cattle in a trophy-winning Fuso truck. Shane Palmer, who bought the FV Heavy cattle truck from a Fuso dealership last year, recently won the Best Japanese Truck trophy at the Koroit Truck Show, an event that draws trucks from all over western Victoria and beyond. 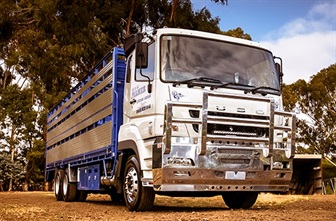 The big FV Heavy truck might look great but it isn’t too pretty to work hard, earning its keep carting sheep, cows and even buffalo on the roads around Shane’s home town of Hamilton, some 300km west of Melbourne. Shane always wanted to run his own livestock transport business after years of driving for others and took the plunge two years ago. Taking over a business from a veteran hauler gave him a foot in the door, but also left him with an old truck and an even older tray and stock crate.

"The truck was a 2006 Iveco and the tray and crate had been on a few trucks already," Shane says. Shane wanted to make the switch to a new truck before the all-important lamb season and spotted a truck and crate package offered by a Fuso dealership. The idea of having something ready to work appealed to him.

"We were getting towards lamb season, the busiest time of the year starting November with 50,000-60,000 sheep and lambs per sale to be moved," Shane says. "You have a couple of crate builders, they can take six to eight months to build a crate they are that far behind."

Just six weeks after placing the order, Shane’s truck complete with a two-deck 28-foot crate, was ready to work. The crate builders, NJE in Warragul, were also able to incorporate custom elements, including a large tool box, special crank top-deck floors that drop down to protect the crate sides when carting cattle and dog boxes for Shane’s two valuable kelpie herders.

The truck also came with a bullbar to protect it from kangaroos that feed at the side of the Hamilton Highway in great numbers. Shane organised for Eva McFadden of nearby Casterton to finish off the look with some tasteful signwriting and was happy with the result. Doing his research before committing to his new Fuso, Shane looked at lower mileage used trucks as well, but says: "there was too much mucking around and the cost was getting up there. With five years warranty on this Fuso and 30,000km service intervals, it makes sense for us." 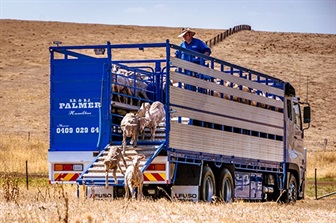 The 6x4 has a Gross Vehicle Mass of 24 tonnes and it runs rear airbag suspension, which can be raised or lowered from the cabin. This is a big plus because, as Shane explains, loading ramps are different heights. "If you have too much height difference (between the ramp and the truck) when you have lambs, they won’t want to walk up and will stumble at the end of the ramp," he says. "But on low ramps, you can drop the airbags to meet up with the ramp."

The truck can haul up to 150 sheep or 25 cattle as is, but will also be able to take a trailer when Shane is ready to make the investment. With the extra load in mind, Shane wanted to get a truck with some decent pulling power. The Heavy has a proven 12-litre six-cylinder engine that generates 400hp and 2000Nm and is linked up to a 12-speed automated transmission. "It has good horsepower, that’s for sure," Shane says.

The 44-year-old was also impressed by other elements of the Heavy’s design, including the innovative passenger-side lower door window. "You have great vision up there, you really can see everything,” he says.

Shane also appreciates the big Fuso’s manoeuvrability. "It has a great turning circle, which helps getting in and out of some of the pokey little yards."